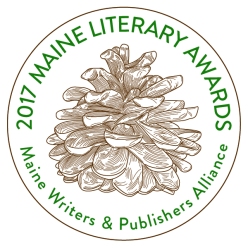 “The MWPA is pleased to announce the finalists for the 2017 Maine Literary Awards. The awards—which honor books published during 2016, as well as adult and youth manuscripts in drama, fiction, nonfiction, and poetry—brought in a near record-breaking number of submissions. This year, 150 books were entered across the award’s categories; compare that to the 2011 awards when 70 books total were submitted. In addition, more than 80 manuscripts were submitted into the award’s Short Works Competition, and nearly 40 Maine students submitted work in the same categories in the award’s Youth Competition. The winners of the 2017 Maine Literary Awards will be revealed live at a ceremony on Thursday, June 1 at SPACE Gallery in downtown Portland. Doors open at 6:00 p.m. and the ceremony beings at 7:00 p.m. Longfellow Books will be on hand at the ceremony to sell books by the finalist’s, and there will be a cash bar. The event is free to MWPA members with a suggested $5 donation for nonmembers.”

Here are the two we are watching and will be awaiting the results:

Although we didn’t win, we were so pleased to be nominated for the an Agatha Christie Award! On January 25th Mystery Fanfare listed the 2017 nominees for the Agatha Christie awards, our book ‘A Good Man with a Dog’ was listed with two other nominees in the Non-Fiction category.